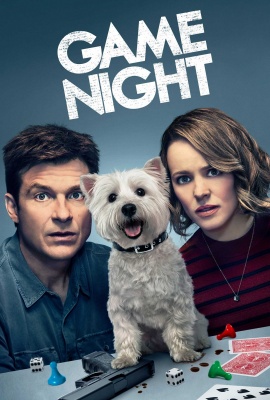 May 27, 2018 Evan Montgomery Movie Reviews Comments Off on Game Night

Jason Bateman headlines an amazing, clever new twist on typical comedies. Max and Annie’s weekly game night gets kicked up a notch when Max’s brother Brooks arranges a murder mystery party — complete with fake thugs and federal agents. So when Brooks gets kidnapped, it’s all supposed to be part of the game. As the competitors set out to solve the case, they start to learn that neither the game nor Brooks are what they seem to be. The friends soon find themselves in over their heads as each twist leads to another unexpected turn over the course of one chaotic night.

So the first thing that I had but I really enjoyed about game night was on Jesse Plemmons’ performance as Gary, but the first thing that I have to say about him is that I don’t see him as Gary, I see him as Todd from Breaking Bad. I’m a huge Breaking Bad fan, as are most people. I’ve seen the show like at least five times all the way through and so I just immediately noticed “oh that’s Todd” because that’s what I that’s the first thing I identify him from. His performance initially did this: I would not have enjoyed Game Night without Todd. I can certainly say he is definitely the star of the film in my eyes, hands down. Todd delivered some of the funniest parts of the movie that had me LAUGHING OUT LOUD. I’ll tell you a little bit about myself: I’m not the type of person who just laughs out loud. I’ll typically give a bit of a chuckle and if I’m feeling a little edgy I might even give a little bit of a grin. However, Todd had me literally laughing he delivered a great performance it was absolutely hilarious and I would not enjoyed this movie without him. Todd was definitely the the MVP in this film.

Now about Jason Bateman’s performance. I love Jason Bateman! I think he is an incredible actor! He has delivered incredible roles in the movie such as Ozark (if you haven’t seen that, give it a watch it’s on Netflix). In Horrible Bosses he was incredible and hilarious, but in this movie I did not really enjoy Jason Bateman. I think that there could’ve been much better cast assignment for his role. Now don’t get me wrong, he did fine! He didn’t act badly, it’s just he didn’t really come across as anything special. He came across as the typical Jason Bateman role where he is just kind of fed up with someone and someone’s always on his nerves all the time. So, I don’t know he did just the same role that I’ve seen him do a bunch of times and he just didn’t really do that much for me. I would have without a doubt recasted him as someone who could have portrayed more for the leading character.

But Rachel McAdams, his wife in the movie did an incredible job. She was completely hilarious, I was losing my mind laughing at her. She delivered a great performance and was definitely the better part of their of their little group. Now as for the plot I was really really enjoying it up until about 10-20 minutes before the end of the movie there’s this brilliant reveal.

so Todd was planning the whole thing to get back into the group. Great. Absolutely beautiful I love Todd so gimme more of this hilarious man.

Now they start off that they’re playing this game someone is going to kidnapped and they got a figure how it is and then surprise surprise these are actual people who are criminals and they’re trying to hurt them. There’s this twist at the end that was really just thought he was lining up at this game and I was like oh that’s really cool what a great way to end the movie. And they switched it back again. They were like no he’s actually are criminals. It felt really felt really forced and unnecessary the last 10- 20 minutes I just couldn’t get behind. It felt forced and not necessary to storyline.

I felt like the entire movie for the most part was really good. I normally don’t really enjoy comedies or well I enjoy them but they’re not like my kind of movie typically. This was definitely one of the best comedies I’ve seen in a while. It had a great storyline for the most part and it had me laughing at parts that I wasn’t really expecting to be truly enjoyable to me. It had a nice story line and definitely was a good time to go and see.