Well, October recently drew to a close and so most people got their fix of horror movies. But there’s no need to be like most people. You can be like me and live every day like it is Halloween with countless horror movie marathons. So to aid you on this pointless, yet incredibly fulfilling quest, I’ve brought you a fun little list of the ten essential horror movies you need to experience. 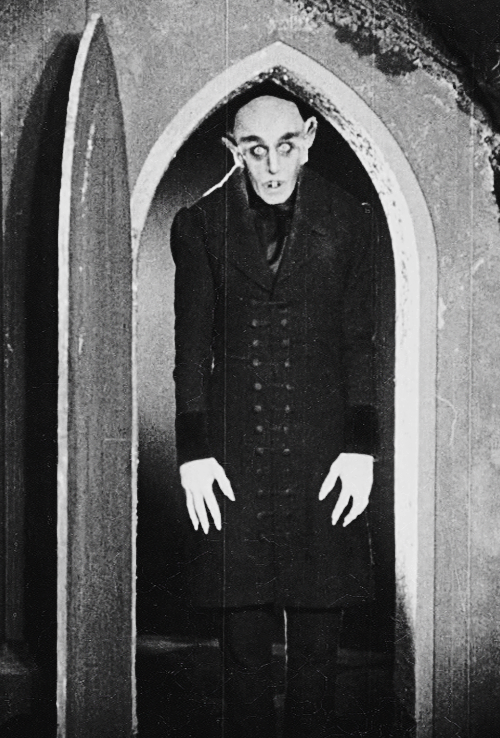 Most people today will mentally discard Nosferatu as a quality horror movie because of its age. And let’s be fair, it’s 96 years old! But that is no way to treat arguably the most legendary horror movie in film history. First off, it essentially started off the entire horror genre. Drawing from Dracula, Max Schreck’s Count Orlok is creepy and grotesque, truly portraying a fearsome /monster. His performance reimagined the budding film industry, introducing the prevalence of monsters and fright in popular culture. My personal favorite part of this movie, however, draws from the score. The composition of music delivers thrill and brutal emotion that is unrivaled to this day and cements its spot as a staple of the horror genre.

When thinking of classic monster movies,  Ridley Scott’s Alien is the first one that pops into my head. An instrumental movie to the industry that perfectly captures the driving idea behind monster stories since the likes of Mary Shelley — the animalistic part of the human mind that exposes itself when threatened. The Xenomorph is a brutal, horrifying figure that relentlessly hunts down each member of the crew until only one remains. And that one member is Ripley, brilliantly played by Sigourney Weaver. She was the first truly badass woman in film and does an incredible job with it. The fright and pure skill of Ridley Scott’s filmmaking make this a classic that will permanently remain as an essential to the genre for a long time to come.

8. The Cabin in the Woods

Now, The Cabin in the Woods is not your traditional horror movie. Rather, it blends comedy and horror in spectacular fashion while providing meta-commentary on the genre as a whole. The story is hilarious, unique, and thrilling along with superb acting by Chris Hemsworth, Kristen Connolly, and Fran Kranz. The genius of the story is compounded by the performances of these actors, displaying the skill of both actor and writer. This movie is incredibly entertaining throughout the entire film, without a single point that doesn’t encapture the viewer’s mind and hold them enriched in the film, subconsciously bringing up questions that put the movie at a kevek that very few have reached.

Saw has recently become the highest grossing horror franchise of all time, but unfortunately, quite a few of the movies are merely reskins of their predecessors featuring more gory traps. The first movie, however, is incredible. It entrenches itself in the moral debate over whether or not it is alright in our society to kill and torture those who have damaged culture and society as a whole. Tobin Bell delivers an incredible performance as the Jigsaw Killer, going after the derelict and tormentors of society with a clever ferocity that holds the viewer entertained. The franchise as a whole is known for having huge twists at the end, yet not a single one does quite as good of a job as the original, which enchants and invigorates the audience with surprise that flips the story around entirely.

Ah. The good ol’ slasher film. A genre milked way before 1996 with a few Halloweens here and a few Nightmare on Elm Streets there… until Scream came along. Scream redefined the sub-genre and breathed new life into it. It has comedic elements and makes fun of the typical slasher film. Not to mention that it has one of the most iconic horror villains in Ghostface. The movie is funny, topical, and extremely interesting with a cast that will keep the movie in its prime long after others like it fall.

Ahhh, The Shining. Arguably, (and in my opinion) the best film that Stanley Kubrick directed. This tale of descent into madness has fear not only in the murder and little twins that run rampant throughout the film but also in the sheer terror that comes with the realization that these mental health problems can happen in the real world. (And have happened). Jack Nicholson’s performance is stellar and is referred to by many as the best horror performance of all time. The scenes and imagery have been linked to modern day culture and will be remembered for a very, very long time.

Now for some awful reason, The Babadook has been seen by many as not very entertaining, although offering intriguing commentary. And to those people, I have just one little thing to say… what IN THE FUCK is wrong with you?!? The Babadook has real fear — literally manifested in the Babadook… a demonic creature inside of a children’s book. The film has two incredible actors who do their parts and mother and son impeccably and outlines the dangers and responsibilities of parenting. The analysis of the human psyche is frighteningly poignant and defines many real-world problems that people have to deal with in their own lives.

Here is where it got truly difficult for me. In all honesty, the next three items on this list can all be used interchangeably, as each is so vital to the current film meta. Get Out , however, is unlike any other horror movie on the market today. Its commentary on the racism in modern America is incredibly poignant and drives forward a message stronger than any figure on this list. Jordan Peele’s script is written expertly and his film style is downright breathtaking, especially for a rookie director. However, this movie would not be nearly as amazing as it is without the skill of Daniel Kaluuya, who delivers a raw, emotional performance that drives the viewer directly into his mind, helping them truly identify and fear the experience he goes through. This movie will no doubt be hailed for many years for the cultural impact, along with the enthralling storyline and incredible filming.

2. Silence of the Lambs

Silence of the Lambs may not be a horror movie by the most technical terms, but it comes about as close as you can get. A staple of modern cinema, this film redefined how to film thriller/horror and incorporated styles that are used in practically every major movie today.  Anthony Hopkins’ performance as Dr. Hannibal Lecter is ingenious and defines his character as a truly bone-chilling monster. I mean, if you google terrifying quotes, you will not have to scroll far to find Dr. Lecter on there. The quality of this movie is incredibly ahead of its time and defined the future of thriller/horror.

Now the number 1: The Conjuring. God, this movie is so fucking good. I mean, I never get scared watching horror movies. Like, I can watch demonic dolls carve into people without blinking. But this movie is downright terrifying. Every time I watch the ‘clap scene’, chills run down my spine. EVERY. DAMN. TIME. James Wan is honestly horror’s savior in my eyes. He took a genre that was feeling old and decreased in quality with every new movie and breathed new life into it. The skill of the director is evident here, with chilling shots and frightening details that you will notice watching the movie over and over again. The Conjuring is the movie that will be referenced in film schools everywhere for years to come on how to do the perfect horror movie.

So that’s gonna be my final order. Yup. Yeah. Ugh, this was so hard to choose between. But yeah, this is the final order. Probably. Now I know it is very surprising not to see Halloween on this list, as it is often cited as the greatest horror movie of all time, and that is part of the reason I did not include it – it gets more than its fair share of recognition, so I think John Carpenter won’t mind that I don’t include it on my second-rate movie blog (actually more like sixth or seventh-rate, come to think). Not to say that Halloween does not tell a great and classic story, it does. BUT. Each and every one of these movies holds a special place in my heart in shaping my own writing and aspirations as a writer. They are more than just a story to me, and every single one absolutely NEEDED to be on my list, or I would not be able to forgive myself. This list defines my passion and a gross amount of inspiration from which I draw, so I send out a deep and passionate ‘thank you’ to every creator, director, and writer on this list because without you, I would not have the passion that drives me in my everyday life.