The newest season of Santa Clarita Diet has just been released. It follows up the success of the other seasons with the exact recipe that made it incredible to me in the first place. The comedy always lands spot on, with a style that is different in every joke. This sporadic comedy style works wonders of audience expectation and leads to a more positive viewing experience. 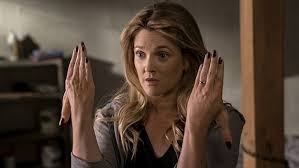 The acting here is as good as ever. Drew Barrymore delivers her lines with an insatiability (lolz) that is incredibly wonderful to enjoy. My personal favorite is Timothy Olyphant who steals the show in every scene he is in. You can’t help but burst out laughing at least once an episode.

I will say one bad thing about this show. It played into my fear of TV show seasons like these. Each season gets more and more grandiose to the point where it is no longer engaging to each character and stops looking at what made the show great in the first place. It seems like they are getting there with what may become a zombie apocalypse, but hopefully they will catch it and rein themselves in before they go off the rails.

All in all, this season followed up the story incredibly well and brought you to an even deeper understanding of what makes each character tick. One thing is for sure. If you don’t like blood, don’t watch this show.