So I’ve heard a lot of people on Twitter, etc. talking about how this was a weak card. Anyone who thinks that is spoiled by the new ESPN era. In the past few years we would get two, maybe three events per month, and that’s including PPVs. Now we get a weekly card that is almost always incredibly entertaining. This one was no different.

Julian Erosa needs to learn his range. If he ends up with another UFC fight, he will need to take full advantage of that massive length he has on everyone.

As for Arce, his boxing was technical, pieced together, and accurate. He countered nicely and although I still don’t see a lot of power in his hands, he has it in his feet. A left high kick clipped Juicy J just right and he just fell. Legs went and just collapsed to the ground. I like Arce but I still don’t think his game is well-rounded enough and his power doesn’t come in at the right times, especially against a more defensive opponent. I’m hesitant to get on the hype train, but he does have a future in the UFC.

I feel like a lot of people, including myself, counted Zak out based on his edge. Well, he proved everyone wrong with a tight guillotine sunk in after a vicious knockdown against Trevin Giles. He still has a lot of fight in him and he drove that home here.

Giles really disappointed me. If this fight had gone the distance, I still could see Giles losing the match based on his lack of volume. Sure, he has power, but I did not like what I saw from Giles here.

The only new information that I got here is that Herman still has power and Cummins still doesn’t have a chin. Shocking.

Well, Grant Dawson’s wrestling took over again in this match for a submission win over the surging Mike Trizano. This is definitely the sort of match we could see again a few years down the line and it was well contested throughout the night. The element of Dawson’s game that needs to be rounded out is his striking. He was able to be clipped way too much by Trizano, and although Mikey is a striker by default, you can’t have any striking holes when going up against the Featherweight division. Look for both fighters to be insane going forward. 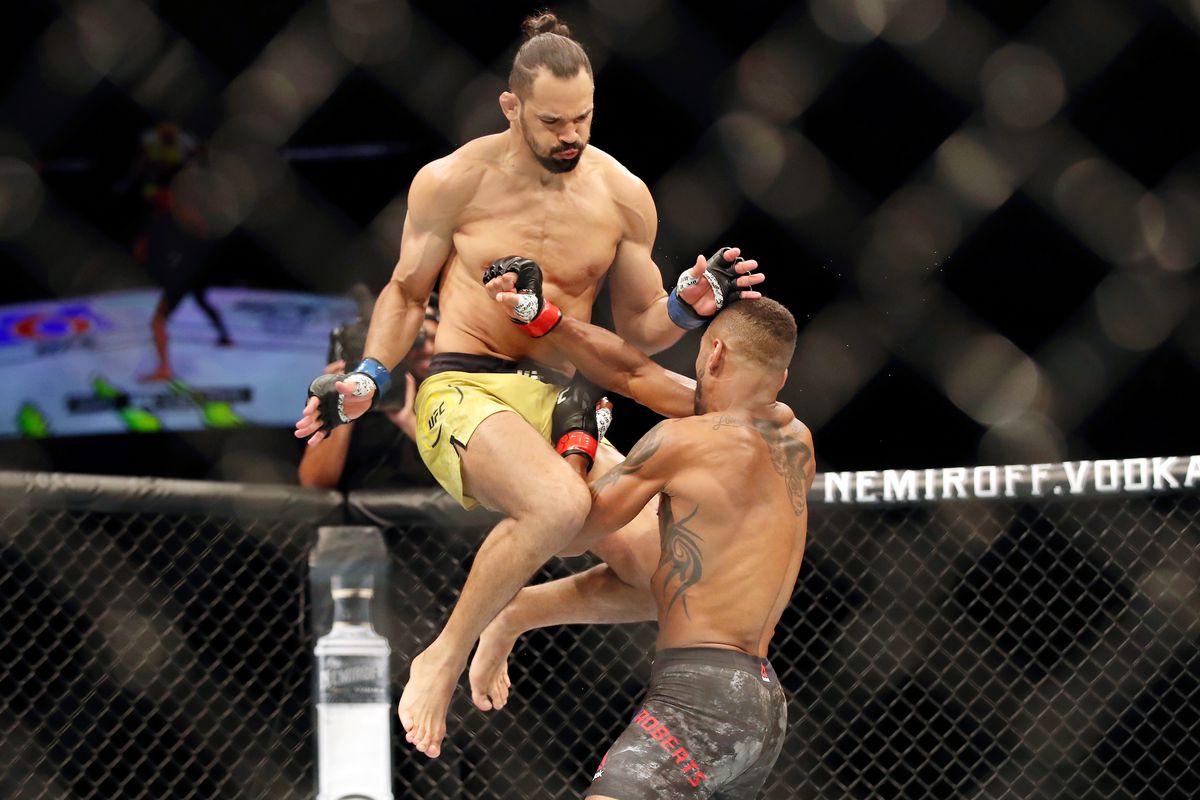 Michel Pereira came into the Octagon with tears in his eyes, overwhelmed by the emotion. He ended it a minute and a half later with a knee followed by a straight right. No ground and pound required. A lot of people, including myself, were discounting Pereira because of gas tank problems. Then again, a gas tank doesn’t matter when you finish the fight in the first round.

As for Roberts, he’s looking very chinny. I think he will get one more UFC fight, but that will be his hail mary to stay in the division.

Desmond Green came in hot, looking flashy in that first round in front of his hometown crowd. He worked Jourdain over in the first round, but it got significantly closer after that round. Jourdain seemed to speed up and land better combos. I felt that the natural Featherweight handled himself well against the bigger man and I’m looking forward to more from him. I didn’t learn much new on Desmond, other than what I already knew about him.

This was a fun matchup that was a technique workshop. I thought Ladd would have the boxing advantage and Sarj would be the advancer on the ground. Instead, Eubanks pieced Ladd up on the feet, but Aspen worked her opponent over whenever she got on top. This was a high-level match with elite reversals, transitions, and all-around fighting. I’m excited to see more from both these fighters.

This match made me mad. Ramos ruled the world when it was on the ground, but he was content to just stand there and look for a big punch. He ultimately came away with the win, but not in any part by his stand-up performance. His control saved his life, but a volume striker will be able to beat Ramos in a pinch.

Austin Hubbard looked really nice out there for someone making his UFC debut. He was going up against a specialist and his fight IQ showed up. He was able to avoid a submission from one of the greatest submission masters on the planet in Ramos, which is seriously impressive to me. He had the advantage on the feet and I think against a less specialized fighter, he could mount a serious threat. 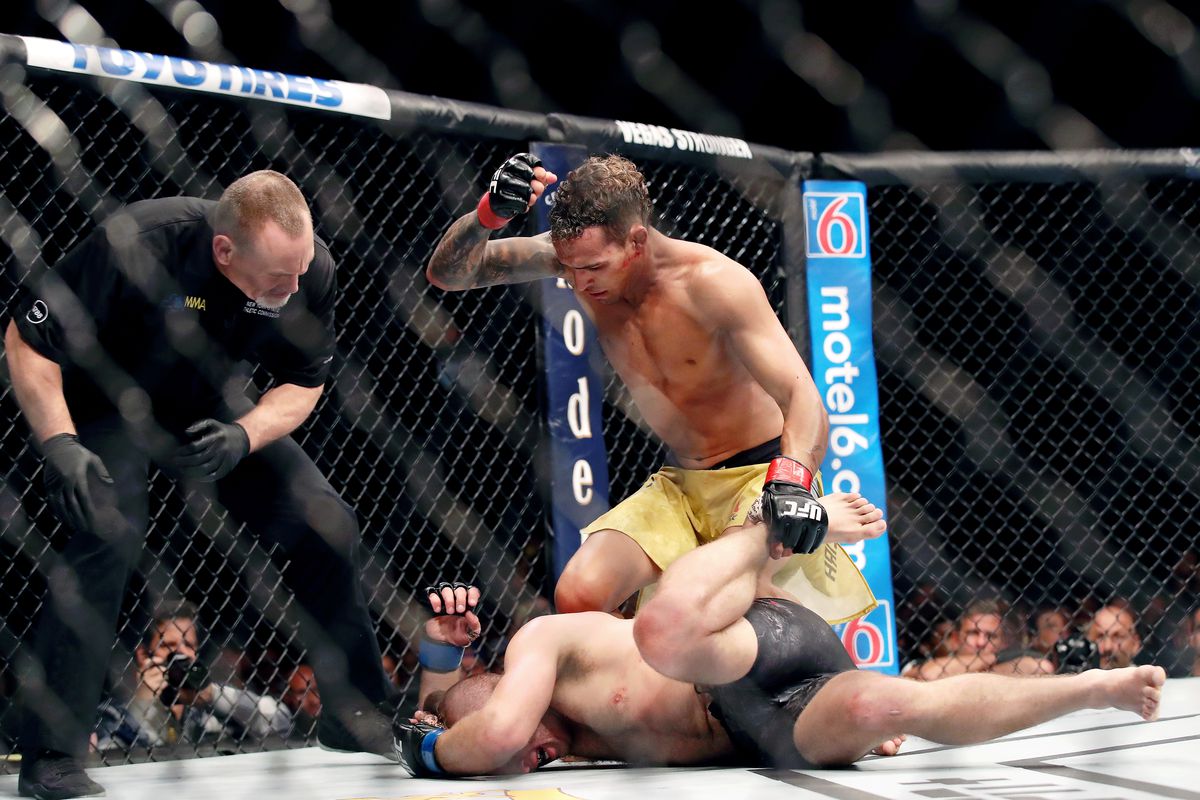 Well, many people saw Oliveira taking the win. Many did not see him doing it with a knockout. Oliveira clipped Lentz then finished him with the ground and pound. Although Oliveira is a veteran in there and has TONS of fights, he is currently looking the best he ever has and is only 29 years old. With more performances like this one, Oliveira could make a run to a contender.

Lentz is looking better, but this was just a bad match. Maybe at three losses for Lentz against Oliveira, they won’t try to run it back.

First round KO from Vicente. Yeah, a lot of people saw this one. a knockdown from Derrick Krantz in the first ten seconds? That was surprising.

Nothing has changed on how I see Luque. He still has frightening power along with one hell of a submission game. Krantz, though, is looking MUCH better after this. Sure, he got knocked out, but there’s no shame in that when it’s a short notice replacement to fight The Silent Assassin. Just the fact that he knocked Luque down then was able to roll around with him on the ground is impressive in itself.

Well, I said the winner would take it on the first round depending on if Megan was able to block the takedown. I just picked the wrong person.

Hopefully, everyone will see what is just so great about Ian Heinisch. He proved his wrestling is dominant on the offensive and is a savior on the defensive. His striking is damaging and he can throw hands in a brawl if he needs to. The biggest improvement I saw here was his fight IQ. Instead of just rushing in without care and thrashing his opponent, he used a technical approach against the dangerous submission fighter. While that’s plenty entertaining, it isn’t always the smartest route. Heinisch showed he can play both sides of the coin in expert fashion. Let’s get this man Derek Brunson!!

The first two rounds of this were Wrestle City. Each fighter was tossing, tripping, taking down their opponent at every chance they get. After Lee’s gas tank started to slip, RDA took the fight into his most comfortable spot: striking. He pieced up Lee for a round and a half, then sunk in a choke to finish the job. 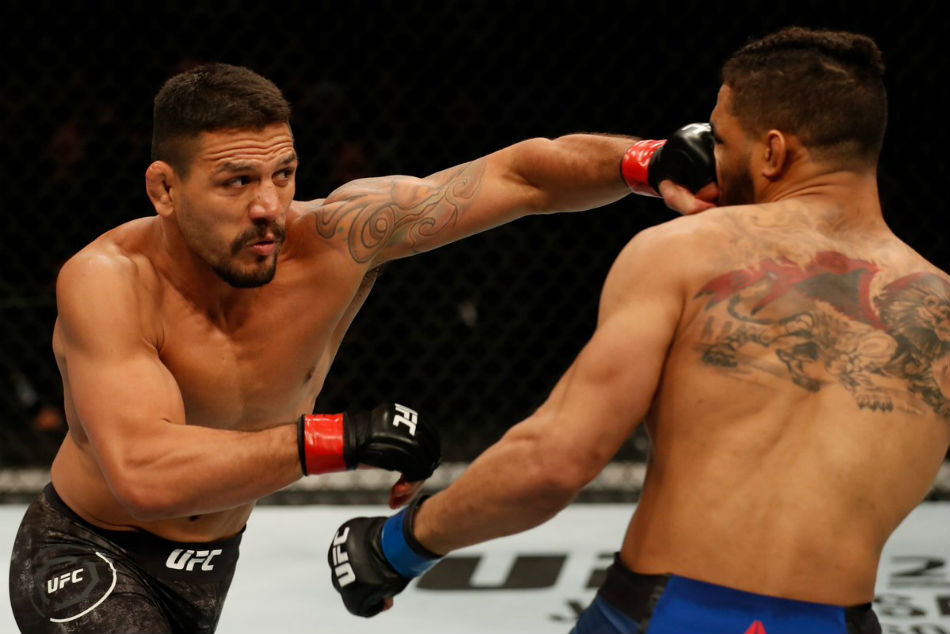 Anyone who said RDA is done after his loss at the interim Welterweight shot is a liar. RDA showed here that his game plan is one that is threatening to anyone. If you’re a wrestler, boxer, or whatever, it doesn’t matter because RDA has a plan and a method to fight you. Sure, he isn’t always successful, but he always puts up a fight. I personally find it insulting that people are counting him out and it’s good to see them all proved wrong.

I hope Kevin Lee stays at Welterweight. He put out a very heartfelt message on his Instagram after the fight and that’s always touching to see, especially from these fighters like Lee, who people quite frankly see as a bit of a dick. I hate weight cutting in this sport. It takes out power, skill, and leaves the fighters more prone to injury so it’s great to see fighters heading closer to their natural weight classes. Although Lee wasn’t victorious, I would absolutely love to see the trend of weight cutting come to a close.

We had another fun night of fights and as always, you can check out my predictions for this one right here. We have a dry spell next weekend, but then the Octagon will be heading to Stockholm for a Light Heavyweight showdown.