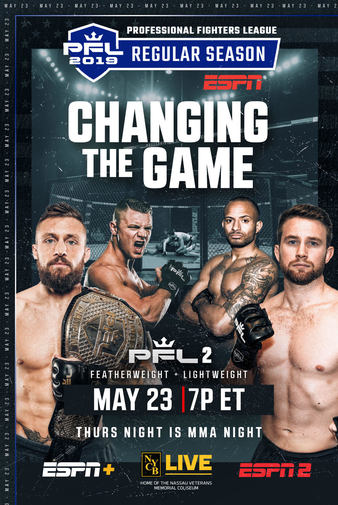 Well we’re right in the middle of a UFC drought so this PFL card could not have come in at a better time. This week we were given matches in the Lightweight and Featherweight division.

The PFL is the only MMA organization with a regular season, playoffs, and championships. There are 6 Men’s weight classes (FTW, LW, WW, MW, LHW, HW) each with 10 fighters and the Women’s Lightweight division with 8 fighters. Each week, fighters match up and fight to earn points, earning 3 for a win and bonus points for early finishes (3 for Round 1, 2 for Round 2, and 1 for Round 3). At the end of the regular season, the top 8 fighters advance on to the tournament playoffs.

A lot of people going into this match thought that Spiler would take control here after coming in as a runner up in last year’s PFL season. Rabadanov dominated this match. The Dagestani used that classic Sambo wrestling that Dagestan is known for to dominate on the ground. His takedowns looked great and he was entirely dominant on top. His standup was still lacking but I’m sure that is his main area he is working on. All in all, he looked defensively sound and he will be a front runner going forward in Khabib style. 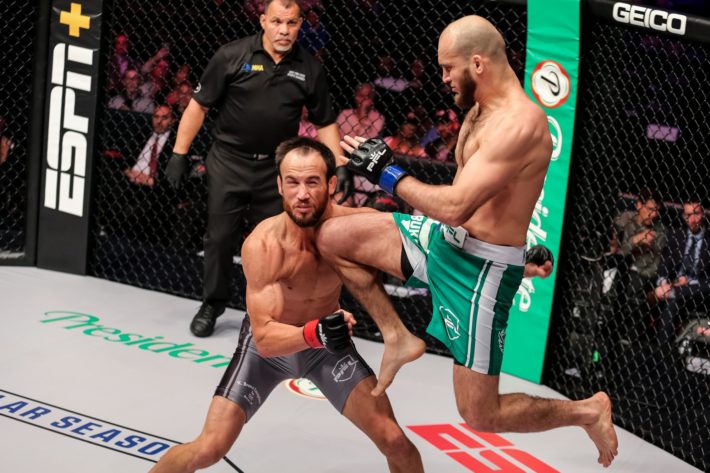 Khaibulaev came in as the only undefeated Featherweight in the PFL organization. “Killer” did not disappoint. His first shot of the night was a flying knee that crumpled his opponent in front of him IN ONLY TEN SECONDS. Killer is simply dangerous and he will is currently the leader for the Featherweights and will be looking to capitalize on that in the weeks ahead after the fastest finish in PFL history.

Luis Laurentino came in as a massive underdog despite a 33-1 record. He is a world-class grappler (I mean, you don’t get a jiu-jitsu tattoo for nothing) but got this win with a fast knockout. Although Kennedy trains with the current PFL champion and has UFC experience, Laurentino quickly showed he was not intimidated in any way. Laurentino has recently moved up from Bantamweight and his power evidently increased in the jump upward. That combined with his grappling makes him a serious threat in the division. Like in the match prior to this one, there isn’t much to say about the loser as this match only went 23 seconds.

Natan Schulte came in as the 2018 LW champion and kept our streak of first round finishes going. Pretty much right off the bat, he used his judo to throw Bao to the ground and then moved to mount quickly. From there, he demolished his opponent with ground and pound into giving up his back, then used a rear naked choke to finish the job. Schulte showed that he’s not the defending champion for nothing. Bao looked awful on the ground with zero defensive game whatsoever. On the feet, his only advantage came from his winging power. Bao might be one to bet against going forward.

This was a fun one. Loik “Jaguar Paw” came in with a fury, throwing fire in his hands and keeping up the pressure. It wasn’t enough against the technical gameplan of Magomedov, who used his boxing to keep Loik at range and piece him apart. At the end of the third, he landed a takedown and showed off a bit of his wrestling game, but did the job quite nicely on the feet. Although not having serious knockout power, Magomedov kept up his contender spot from his finalist placing last year, but I was impressed by Radzhabov, who will be very entertaining going forward. We may very well see this one run back in the playoffs.

This one was a pretty fun match. It was a close decision that was defined by striking vs grappling. Djiroun worked his opponent around on the feet but on the ground it was all Mamedov. The control time ended up getting Islam the win here but different judging could have gotten a different result here.

Aliev stopped his opponent with a brutal uppercut then finished the match with brutal ground and pound strikes. Before that massive shot, it was well contested byt Aliev definitely maximized his length to prove he is a threat going forward.

This was the worst match of the night. Peter Petties is a great fighter who loves a good brawl. Harrison is a wrestler who would land an early takedown and just lay on his opponent. It was horrible. The last 30 seconds of the match were the only entertaining portion, where Harrison ran for a few submissions.

This was another WrestleMania event. Wade had Andrews grounded for the first two rounds then Andrews fired up an armbar towards the end of the third. This was a good event, but not much was shown about Andrews game as this was way too one-sided.

Another fight, another wrestling match. The difference for this one was Palmer’s utter domination here. Palmer was the Featherweight champion last year and he followed that performance up nice here. Gilpin had no option once this hit the mat and I assume Palmer will be dominant again in this year.

We had a fun night here. We have four more weeks then we will be into the playoffs. Once those playoffs start, I’ll be in, making my predictions for who will take home the victory.