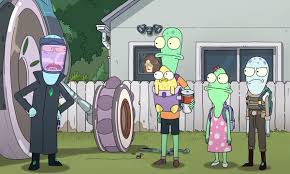 “Solar Opposites” is the new stand alone show from Justin Roiland (co-creator of Rick and Morty) which follows the misadventures of an alien family from space. I tried to enjoy the show but couldn’t help but compare it to “Rick and Morty”. Almost everything about the show feels the same. The art style, the futuristic sci-fi technology, even the main character Korvo just feels like a more serious version of Rick. I didn’t care about any of the four main characters as they all felt two-dimensional and dull. I’ll be the first to say that overall the show isn’t that good and I probably wouldn’t re watch it as a whole anytime soon. As a whole.

There is however one part of the show that is incredible and is why I would tune into a second season. This part of the show is a c-plot known as “The Wall”. Although this section of the show is a c-plot it does get one episode to itself which is easily the best episode in the show. The wall is built up from a background gag of one of the show’s main characters, Yumulack, shrinking down humans he deems bad and putting them in a cage he built in his bedroom wall. Inside the wall all the humans he drops in there build their own society and government. The plot follows a man named Tim who was previously just a waiter at a restaurant before becoming the leader of a rebellion against a broken system. The episode about the wall has Tim take down the corrupt government and find a way out of the wall. He ultimately lies, claiming there is no way out so he can remain someone who matters in the wall vs a nobody in the real world. Going from this episode to another episode of alien shenanigans is very hard because the show’s subplot is about ten times better than the show itself. I hope to see more of the wall if the show returns for a second season and hopefully they can improve the show as a whole.